The Nature of Line 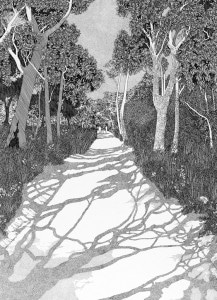 Artist’s Statement – The Nature of Line

In the search for recognition, and trying to find the right niche in which to promote this artistic approach, I have found it difficult in both locating an audience to appreciate my work as well as trying to determine where this particular approach to drawing and painting sits within the contemporary art scene. The nature of the work has a lot to do with my feelings towards how the natural environment has slowly been disappearing and how humanity has consumed that natural beauty.

I make no apologies for the approach I have taken in an attempt to capture the rural spirit of Australia since there is no official way to convey a personal experience.  Artists tend to tell stories and underlying my work is the desire to share my love of the complexity of nature. Many art historians have suggested that imagery can only be seen and judged in a cultural and historical context.  If that is the case, then clearly the turbulence of the artistic approaches taken during the twentieth century has impacted on my approach as much as the destruction of the natural environment which surrounds us.

Like so many of my contemporaries, I have rejected the demands of pure abstractionism. It’s focus on simplifying  everything down to a core essence with a total disregard for anything which may be considered ‘detailed’ produces many works which have a striking similarity.  Insisting on an economy of detail, with the belief that the viewer is incapable of seeing the complexity of the natural world, may have some validity however my intention is to re-enforce the character of that complexity.

I do however recognise that the current direction taken by many artists seems to be  dominated by the cleverness of the concept not necessarily the strength of the craft. This capricious approach has developed a standard that is unchallenged and is both indifferent and contemptuous of any  traditional approaches taken. Dismissed as simply decorative imagery, the guardians of taste see the use of any traditional approach as reactive to current sensitivities and not as a continued development of art. The tradition of abstractionism established at the beginning of the last century is being challenged by a new generation of artists who, one hundred years later, are seeking their own voice and direction in the creation of imagery.

It is not my place to question the underlying motives of other artists. My longing for a past age does not cloud my understanding about  the capriciousness of what current taste dictates. I appreciate the fact that my work will not compare with those artists who simply prefer to confront  the viewer. This tends to limit the impact of my imagery.  I understand this however I refuse to be beguiled by the emotive slash and vigorous use of line regardless of how eloquently the gesture is performed as the predictability of it simply does not satisfy my needs.

Devotion to the development of line art and slavishly working to produce imagery in an attempt to create something that may have an emotional impact on a viewer is the starting point for my work.

My formalistic training was in a range of disciplines.  None of this artistic education was designed to develop my complex narrative compositions or to perpetuate approaches in artistic achievement which have not been seen in recent eras. Although I see no potential in simply following the classical traditions of one hundred and fifty years ago I recognise that many people see the work as dated or from another age.  This does not lesson the value of the art created nor does it reduce my personal feelings or spirit of exploration.

There are many distinguished artists in Australia whose contemporary style is unique. They established their credibility, in many cases, in spite of the attitude displayed by the arbiters of taste. I believe that the underlying principle of free expression has become an underpinning fundamental in the development of artistic styles. This affords me the opportunity to present an approach which doesn’t comfortably fit within current conventions.

My pictorial language follows a long tradition but the imagery does not replicate old master’s work nor does it attempt to echo the power of what has been created in the past.  The work explores a style which simply stands in opposition to contemporary practices. There is no attempt at achieving a realistic look although many people would consider the imagery to be realistic. Clearly we don’t see lines surrounding the forms in our lives and using a linear approach can be seen as more abstract then natural in appearance.

I normally work plein air, sketching in both pencil, pen and ink; and water based mediums. I very rarely do a full detailed drawing when working outside and attempt to capture just what is necessary to get the essence of the scene. These site sketches are then used to inspire the development of the final imagery in the studio. My interpretations of the landscape represent my emotional response to the overwhelming beauty that is the Australian landscape.

The work represents a contemporary view of nature. I don’t believe it can simply be called realistic or naturalistic in approach as the patterns generated to portray varied elements are not necessarily based on natural textures. And, although the approach demands attention to detail there is no strict adherence to giving the imagery a photographic realism.

Expressing my personal interpretation of the complexity of the landscape, I derive a personal satisfaction in rendering what I feel and the technique I use has simply evolved as a result of many years of exploration and development. I think I have developed a signature style that is different from many of my contemporaries.

There is a predominance of the use of pure line in my work. Whether I am working in paint or in ink, the linear aspects stands out and this creates a certain look or style.  This deceptively simplistic approach actually has an underlying foundation and compositional structure that is fairly complex. The character of the work often encompasses a recognition of how time impacts on both nature and humanity. It alludes to the sense of isolation in the individual figure wandering in their own private world.

The most recent work is devoted to this sense of isolation and the relationship between the individual and their place within the natural setting. Whether as a refuge from the intensity of modern life or as simply a metaphor for the complexity of all that surrounds us, the bush seems to encompass an amazing diversity.  My interpretation of nature and  use of the isolated figure in the landscape has become a theme that many of my pieces have followed.

The look of the Australian landscape is unique and although my goal was never to attempt to represent a national identity, this approach in response to the power of the ‘bush’ does seem to have an Australian flavour. It is not the grandeur of Mount Kosciuszko or Uluru but the underlying beauty of a simple old gum tree lying on its side after centuries of fighting the elements that inspire the work. I really don’t know but perhaps the attempt to capture a feeling or moment in time that conveys how special even the loneliest track can be, might in fact be a way of really representing a national identity.